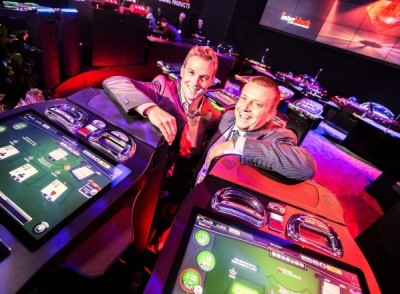 Interblock’s Chairman and Founder, Joc Pececnik, and Global CEO, John Connelly, were interviewed by Review Journal’s Inside Gaming columnist, Howard Stutz, at the Global Gaming Expo. Stutz highlights Interblock’s display at G2E with the launch of its revolutionary Pulse Arena, the world’s first hybrid experience comprised of gaming and social atmospheres, and its new line of ETG’s including blackjack, craps, roulette, and baccarat.

The interview recounts two major company milestones: the installation of 170 electronic table games at the social gaming experience “La Zone,” located inside each of Casinos du Quebec four locations, and the partnership with two leading properties, Resorts World New York and Empire City Casino at Yonkers Raceway, that will bring over 228 incremental Organic Blackjack ETGs for the first time to New York State. This contract will expand Interblock’s footprint in New York State with more than 1,000 stations of recurring revenue which include other leading Interblock ETGs such as roulette and baccarat.

Additionally, Pececnik and Connelly discuss how changes to the gaming landscape have created a wealth of opportunity for Interblock to grow this year and in 2016. “The other companies are spending two to three years on integration. We’ve put together the best management, we have new capital and new products, and now we are on the road,” Pececnik said in the interview with Stutz.

Connelly also states that 2015 is the year of building a solid foundation for the company. Since his appointment to CEO in January, Interblock’s North American headquarters had 18 employees in the office. By the end of 2015 there will be nearly 50 new employees.